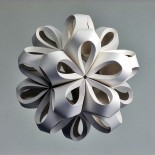 Keeping you up to date with the all the latest work from students, staff, and graduates of the programme, and highlighting the best work & events for 3D Designers from around the world.

Level 4 students were tasked with the job of producing a cube from materials that were either found or acquired from a pound shop. There was a fabulous array of results, including some of the best shown below.  Apologies that I couldn’t include more, but the quick photos I took just didn’t do them justice!

Tommy Walsh produced a fantastic selection of cubes made from sponge, offering an interesting juxtaposition between the angular form and the soft material (good choice of colour too). The two forms shown are identical in their making, but one has just been squeezed and secured in the middle. This simple action completely changes the form and exploits the flexibility of the material (would the same thing happen with clay?)  Tommy also used the offcuts to produce another range of cubes that perfectly fitted the negative space of the larger cube.  These smaller, solid forms used colour as a significant feature, contrasting a small amount of vibrant pink against the yellow to great effect.  an inventive, mindful and well considered solution.

Pete Chadwick applied knowledge gained during his former life within the building trade to the task. His re-appropriation of the white plastic crosses that are normally used as a spacer between ceramic tiles during the tiling process, elevates the status of something cheap, functional and usually hidden. ‘Imagineered’ as a structural and decorative building unit (a lovely contextual play) within the context of a one-off form, Pete’s cube challenges existing pre-conceptions about objects and materials. Even the glue, necessary in joining the units, has been carefully considered, bringing colour to the piece in a useful as well as decorative way. 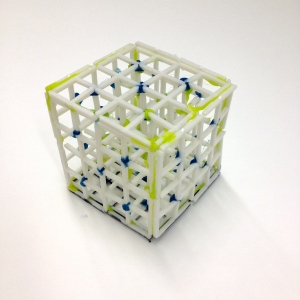 Sophie Boobyer took a very subtle approach, her cube barely visible to the eye. Recycling discarded plastic water bottles, she worked with the way the material curled when cut, building her cube out of multiple transparent cylinders (could you make a cylinder out of cubes?)  The result appears fragile and brittle, as if constructed out of glass, but conversely is durable and springy to the touch, due to the malleability of the material. 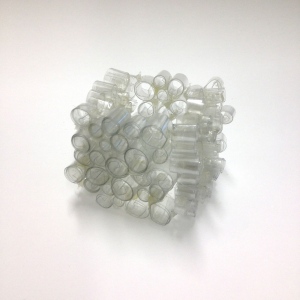 Finally, this offering from Jesse Cracknell, whose sophisticated and sensitvely crafted cube belies it’s humble origins.  Made from pound shop knitting needles, kebab skewers and thread, Jesse’s cube demonstrates how, in skilfull hands, the most mundane materials can be imbued with quality and achieve a high level of finesse.  Jesse is already developing his solution for this task into ideas for seating based on suspension and tension.

Well done to all.  Watch out for a larger selection of cubes coming to a showcase near you soon!